During a discussion initiated by the Vidzeme Planning Region, 6 strong directions of business and research in Vidzeme was identified, as a contribution to raising the competitiveness of the Baltic Sea Region. It was elaborated that the greatest potential for development and cross-border cooperation, regarding the innovative products and services in Vidzeme, exists in the following sectors – Transport, Agriculture, Forestry, Information Technologies and Rehabilitation – highlighting the circular economy as a horizontal principle.

The identified areas in Vidzeme will be included in the jointly defined Transnational Smart Specialisation proposal prepared by several countries for mutually significant and strong business and research directions, which can significantly accelerate the development of the Baltic Sea macro-region and strengthen its competitiveness at European as well as the global level.

Santa Vītola, project manager in the Vidzeme Planning Region, emphasizes “It is essential to participate in such initiatives and identify our local strong areas with which we can successfully operate not only in the local market, but to promote them as economically significant and competitive development directions of the macro-region.”

It is important to note that there are other strong, knowledge-intensive sectors in Vidzeme region, which have also been identified as areas of smart specialisation, however, this discussion was focused around 6 main directions that, based on projects research, are common throughout the Baltic Sea Region, and the task of Vidzeme representatives was to identify the strengths in each of them.

The participants of the discussion agreed that the forest sector is one of those that should be given a significant role in the economic development and competitiveness of the region. Not only does it have a large working population in the region, but it also has great potential to create unique products and services that are essential in other sectors, such as medicine, rehabilitation, and more. It was also recognised that it is urgently necessary to seek solutions for the efficient use of the by-products, for example in forestry and wood processing, in order to reduce the accumulation of surplus production, ease management issues and to convert the currently unused resource into new, innovative products.

Until now, there has been less discussion in Vidzeme about the sustainable use of water resources, including the reuse of rainwater and industrial water. These issues came up in the discussion, citing the large marine and inland water resources as examples. Various studies conducted in Latvia and our researchers’ work with several dozen lakes in different areas, show that their ecological condition is related both to the management of land located near water bodies, i.e., agricultural and forestry activities, and to the presence of settlements or larger areas nearby. The sustainable use of water resources is a whole direction to study, analyse and find solutions for maintaining or returning water to good ecological status.

The participants of the discussion concluded that the Vidzeme region has the potential to strengthen the accessibility of the region, assessing not only the improvement of land connections, but also considering the seacoast, where small ports for both passenger and cargo transportation could be developed. Due to the low population density of Vidzeme region, it is possible to test and try different solutions, thus becoming a pilot area for innovative transport solutions, which are then transferred to other, densely populated areas. As of today, several experiments on this topic have been performed in Vidzeme, incl. “Transport on Demand”, examining how the model of replacing and supplementing public transport would work in practice.

Digitalisation is already recognized as an important direction in Vidzeme, which will not lose its relevance in the future. It should be borne in mind that information technology is cross-sectoral in nature – sectoral services are also essential for the success of other sectors, such as forestry or agriculture, the use of various sensors and virtual or augmented reality training for hazardous chemicals. Regarding this issue, the academic and research activities of Vidzeme University of Applied Sciences play an important role – valuable study programmes have already been developed, laboratories created to strengthen practical skills, and significant research has been carried out.

Finally, during the discussion on Vidzeme’s competitiveness, the clean environment and natural resources were also highlighted. Emphasis was placed on organic farming, including the production of food for health purposes, such as the production of functional foods and food supplements. Also, the attendees saw a high potential in rehabilitation, which is a topical issue not only in Latvia, but also in other partner countries, which is related to changes in the age structure in Europe. At present, in the context of the current concept of prosperity, this sector has great potential for internationalization.

Discussions on support mechanisms specifically for small and medium-sized enterprises, which would allow strengthening their cooperation with foreign partners, were also taking place. The participants of the discussion repeatedly returned to the topic of under-exploiting the potential of cooperation between entrepreneurs and researchers. It should be noted that this issue has also been highlighted before, meaning that players in industries and sectors are beginning to realize the potential benefits of collaboration.

Similar discussions are taking place in other countries in the Baltic Sea region, such as Lithuania, Poland, Finland, Germany, Estonia, Sweden and Denmark. At the end of the discussion, a proposal on the competitive business and research areas of the Baltic Sea macro-region will be updated. It is expected that the identification of such areas would allow the Baltic Sea Region to purposefully develop transnational cooperation between entrepreneurs and researchers, the creation of new products and services, and the exchange of knowledge and experience, thus strengthening the macro-region’s global competitiveness. 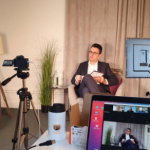 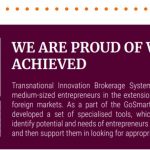